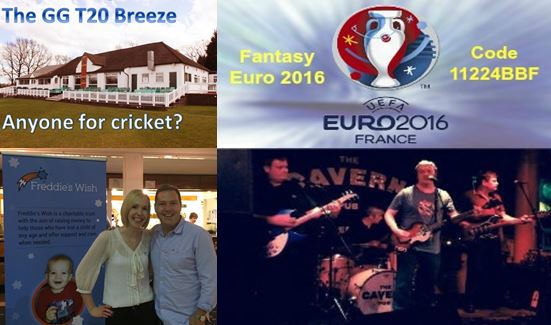 As we look ahead to the Euro 2016 Finals in France, and the optimism surrounding the four home nations (England, Wales, Northern Ireland and the Republic of Ireland) chances, greenwellgleeson are running a Fantasy Football competition with prizes on offer.

Using the McDonalds Euro 2016 game, full details can be found at http://eurofantasy.uefa.com/en. The scoring system appears to be similar to that of the FPL but a full breakdown can be found here.

We have created a league and would encourage everyone to sign up and enter (code needed is 11224BBF).

As the event is in France the winner will receive ‘gloire’ (French for kudos)  and a meal for two at Cafe Rouge and the runner-up a bottle of champagne and not quite so much ‘gloire’!

greenwellgleeson is pleased to report that the Transactional Division had an outstanding performance in May recording its best ever month! Paul’s sole focus on Payroll and Credit Control has helped add genuine recovery value to a number of Shared Service Centres, whilst Barry’s remit to recruit in Accounts Payable / Receivable, Billing and Bookkeeping has helped a number of organisations tighten their Billing and Receivables procedures extensively.

If they can support you in anyway, please contact Paul on 0121 200 7546 or email paul.hancock@ggltd.co.uk for immediate action.

We are now running regular social events to ensure we are engaging with our client offering past the professional boundaries of the client-consultant arena. Having organised some very successful events to date; including Cheltenham Festival, Poker at Broadway Casino and the Glee Club Comedy Night – we are pleased to bring a couple more events to whet the taste-buds of those with a bit more a sporting pedigree.

Following the very successful Charity Quiz night hosted by Price Pearson Kidderminster, in aid of their chosen charity; Freddie’s Wish  – greenwellgleeson will be hosting a couple of paintballing events over the next couple of months. A great chance to get the blood pumping, shoot some recruitment consultants (non-lethally of course) and it presents an opportunity for us to gauge who really is handy with a firearm…just for future reference. Check out how greenwellgleeson managed to secure 5th at the PPK Quiz Night here

We’re also organising our inaugural “greenwellgleeson T20 Breeze” – the corporate version of Natwest’s T20 Blast. Aimed at those of all skills levels, it presents an opportunity to dust down the Gray Nicholls, check the whites still fit and indulge in some fast(ish) paced big(ish) hitting on a County(ish) standard pitch at Moseley Cricket Club – founding member of the Birmingham Cricket League – the oldest club cricket league in the world. View more details here.

These events are generating huge amounts of interest so register your desire to get involved now with one of our consultants or email ggsocial@ggltd.co.uk as soon as possible.

Highlights of other Social Offerings throughout the year include:

We are pleased to promote Paul Hooper-Keeley and his band; Deep Six. Paul is a senior finance professional who we have had the pleasure of knowing for many years. His day job is CFO of Shaylor Construction however his real talent would appear in music. The band formed on 2nd January 2016 and is made up from ex-members of 80s Mod bands, Makin’ Time (the pre-cursor band to The Charlatans), The Threads and The Upper Fifth.

They signed to Heavy Soul Records (who released the debut EP by The Strypes (who recently undertook a stadium tour with the Arctic Monkeys)) within a week of forming and have recently recorded 4-songs at Robanna’s Recording Studio in Birmingham which will be released as a 7” vinyl EP later in the summer.

Deep Six made their ‘live’ debut at the world famous 100 Club on Oxford Street, London, on 11th March (with The Scene, Squire and The Chords UK), followed by playing the Clacton Mod Rally and The Cavern Club in Liverpool as part of the IPO Festival. They play the Hare & Hounds in King’s Heath, Birmingham, on Friday 24th June and will be supporting Tom Hingley of the Inspiral Carpets at the 100 Club in July.

Recordings for a second EP and full length album will be commencing shortly for release later in 2016.

Rob was really pleased to support the NatWest Birmingham team, headed by Graham Handy, in raising funds for St Mary’s Hospice by participating in their Annual Golf Day at Druids Heath Golf Club.

As ever the NatWest guys organised a great day and raised a superb £5,200 for the Hospice. The weather was great and Rob and his team mates Jaz, Graham and Andy were fortunate to walk away with first prize.

More info on the great work St Mary’s do can be found at http://www.birminghamhospice.org.uk/

Have a Fantastic June! Holiday Endlessly, Barbeque Limitlessly and Drink Responsibly! To all of those partaking in religious festivals, we wish you a blessed time throughout your celebrations!

If you’re interested in hearing more about what greenwellgleeson can offer you with regards to recruitment, please don’t hesitate to get in touch.